The creation of all the technical infrastructure for the new TV and Radio production center of the Aragonese entity in Zaragoza and in Huesca and Teruel delegations, as well as the installation of a motion transmission system based on COFDM and the technical exploitation of the channel.

The implication of Telefónica Servicios Audiovisuales in Aragón TV-autonomic TV channel that stands out among others of its kind because of gaining notable audience results- started in 2005 with the awarding of the macro contract in favor of TSA, which would give rise to the born of Aragonese television. Since then, between Aragón TV and Telefónica Servicios Audiovisuales have been founded a solid professional relationship that today is still keeping.

That original contract, awarded to TSA in a very tight public tender with the main Spanish systems integrators of the audiovisual area, included the entirety of the technical infrastructure necessaries to support the radio and television broadcast regulated for the Public Aragonese Corporation (CARTV): equipment, installation, integration, maintenance, and setting up of the main production center and broadcastings of the autonomic channel based in the Zaragoza, as well as territorial delegations in Huesca and Teruel.

The production and emissions center of Zaragoza was designed to satisfy the needs of own production of the channel, reason why it has 2 large sets (300m2 and 500m2), with both a virtual set and set for production of news. All the operations carried out in these sets are coordinated interchangeably from 3 production controls.

Another issue that is important to emphasize about TSA contribution to the start project, is the supply and integration of the first mobile radio unit and the installation of COFDM links system that allows the sending of video and audio signals in movement from each point of the Aragonese Capital without being necessary to set up direct view.

Apart from all of this, Telefónica Servicios Audiovisuales trained and hired the entire technical operations staff that they were in charge of during the years of validity of the contract. They were a staff dependent of TSA that would grow across the years until getting the number of 160 professionals. 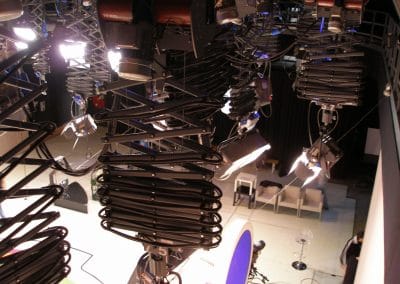 MNLA designed a strategic plan for the implementation of an RF system for satellite communications, which operates in Ka band and has the...