Digital migration to HD of ESPN Brazilian’s Production Center, from a tape-based analogical environment to a shared “Tapeless” environment in the Digital Newsroom, from the camera recording to the broadcasting of its 4 channels, as well as the revamp of its two HD studios at its headquarters in Sao Paulo to be able to carry out HD projects, thus making it possible to digitalise all the results.

ESPN, the American television sports network, required the help of Telefónica Servicios Audiovisuales in 2011, when the sports broadcaster was renovating all its offices, with Sao Paulo being one of the most important through which it aimed to start its renovation plan across Latin America.

The purpose of the project was the digitalisation to provide HD across its entire São Paulo headquarters, which until then had been broadcasting in analogue format, and was still operating with analogue satellite reception, tube monitors and old formats such as Betacam SP and Umatic, equipment that mostly originated in the 1990s.

Within the scope of the project, Telefónica Servicios Audiovisuales arranged the integration of two High Definition studios to include new equipment such as video servers with input and output channels and a HD matrix with audio and an embedded multi-screen system, in such a way that both studios can be controlled indistinctly from any of the playout control rooms, offering great versatility to the configuration. Likewise, the master control rooms are separate and are transforming its equipment to HD, adding redundancy in case a problem arises in either of them.

An NRCS system was also implemented that allows for a complete update of the news workflow, going from tape-based to a shared collaborative environment in which the news is digitally produced in HD, from its ingestion to its broadcast. This system is complemented by new HD post-production booths, integrated within the News system for greater system flexibility.

Thus, Telefónica Servicios Audiovisuales successfully carried out the technological transition of ESPN’s analogue systems and its old equipment towards a new HD model, which allows the digitalisation of files and has updated and provided optimised workflows, thus adding to the multiple projects executed by TSA in Latin America. 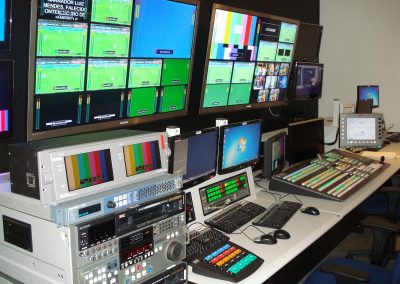 The renewal of RTVE's helicopters TV transmission system, due to their age and obsolescence. Thus, the system becomes digital and HD with all the...

Implementation of a new HD production platform that enables “tapeless” workflows for the production and broadcast of news, sports and programmes,...